In this Cosmic Sea spin-off design collection, I pair up the phases of the moon with zones of the sea. Each pin represents its own moon phase and ocean zone.

The ocean zones have been structured as a dive: we begin with in shallow waters, where we encounter a Loggerhead Sea Turtle.

Want to continue your dive?

Our dive begins on the continental shelf, where marine wildlife thrives in shallow waters and very often spend their lives split between land and sea. In this zone of the sea, we find crabs, reef octopuses, and often a nice variety of juvenile animals preparing for their journey into the open waters. 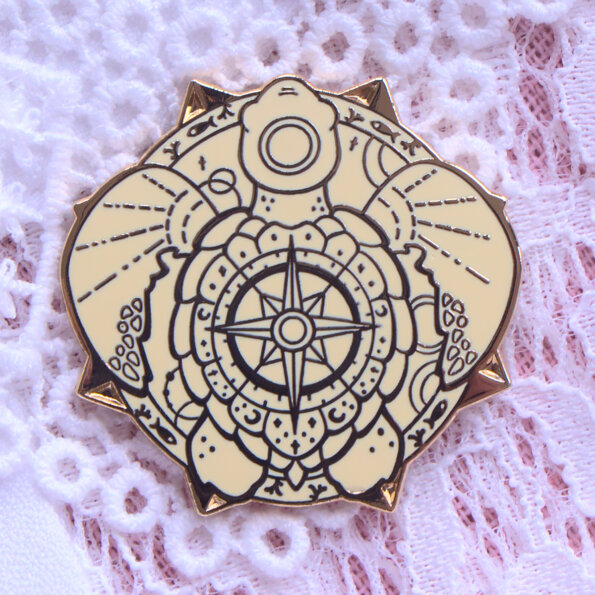 Next up, we visit the Epipelagic Zone of the ocean. It is in this shallow reef zone that we encounter the Tiger Tail Seahorse, who’s been paired up with the Waxing Gibbous moon phase. 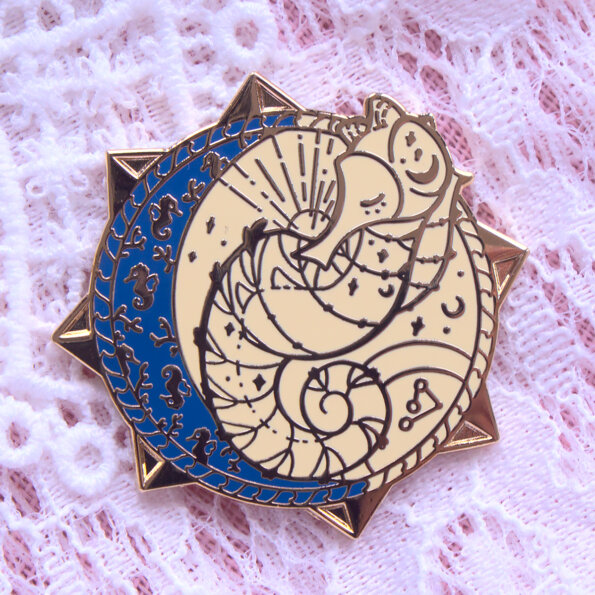 We continue our dive down into the Mesopelagic Zone. This zone is found 200-1000 meters down, and is the home of squid, crabs, cuttlefish, catsharks, tunas, krill, -and many more species! Most species in this zone have muscular bodies, well-developed gills, and large hearts and kidneys. Here, we encounter a pair of Catsharks paired up with the 1st Quarter Moon. 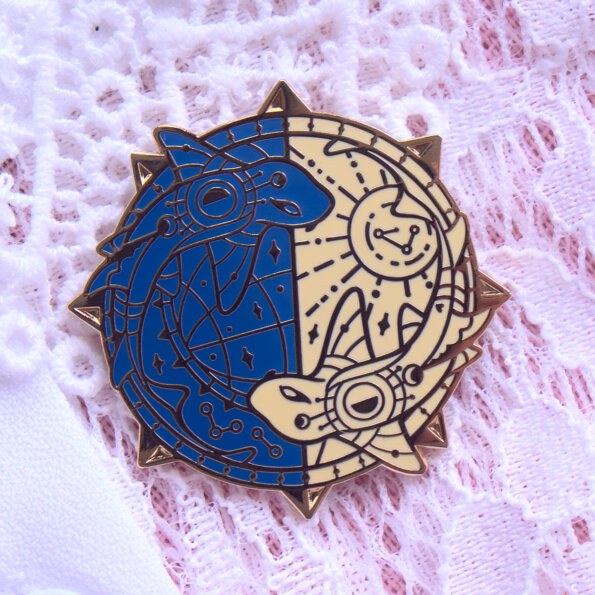 Ready for the deepest depths of the ocean? Before we reach the bottom, we pause in the Abyssopelagic Zone. The Abyssopelagic Zone is home to most of the deep-sea creatures we often hear about, such as the dumbo octopus, hagfish and seapigs. And someone you may have already encountered in my work: the Deep-Sea Anglerfish. In this pin, the Anglerfish is paired with the Waxing Crescent Moon. 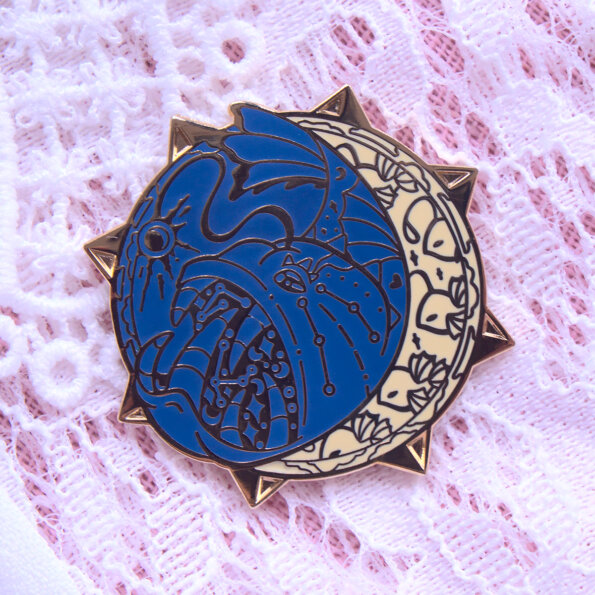 At last, we arrive at the very bottom of the ocean: the Hadal Zone. The Hadal Zone represents the deepest region of our ocean, at around 6k-11k metres down, and located within oceanic trenches. This zone may be large and unlit, but the deepest-living fish known to us is anything but. Introducing: the Mariana Snailfish paired with the New Moon. The Pseudoliparis Swirei, also known as the Mariana Hadal Snailfish, lives at extreme depths of the ocean. It has been observed at a record-breaking depth of 7966m below the surface! 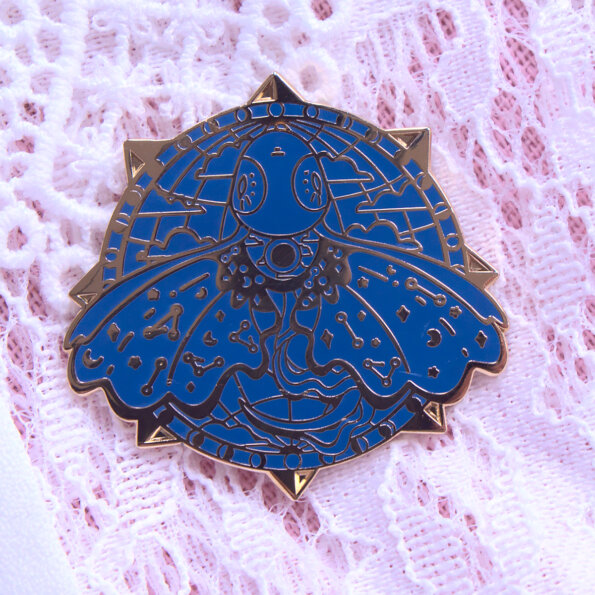 As much as we’d like to, we simply can’t stay at the bottom of the ocean forever. Time’s running out, so let’s head back up!

On our way back to the surface, we revisit the Abyssopelagic Zone. This time, we encounter a Dumbo Octopus paired 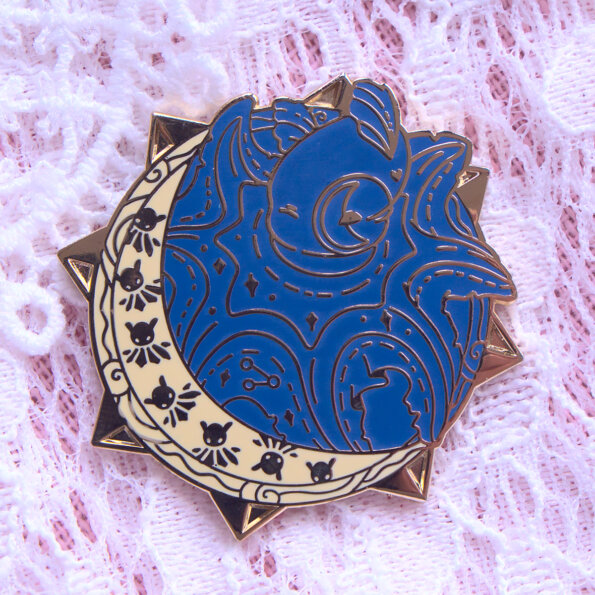 with the Waning Crescent Moon. There are only 13 confirmed individuals of dumbos (Grimpoteuthis Bathynectes).

Next, we revisit the Mesopelagic Zone. Also known as the Twilight Zone, it represents the chunk of the ocean where light is present, but only just. Animals here are referred to as “semi-deep sea” creatures, living in depths from 200m-1000m below sea level. And many are skilled hunters, such as the Weddell Seal! As a highly skilled underwater explorer, the Weddell Seal can hold its breath for up to 45 minutes and can dive as far as 600m below sea level (which is extraordinary for a marine mammal). In this collection, the Weddell Seal pairs up with the 3rd Quarter Moon. 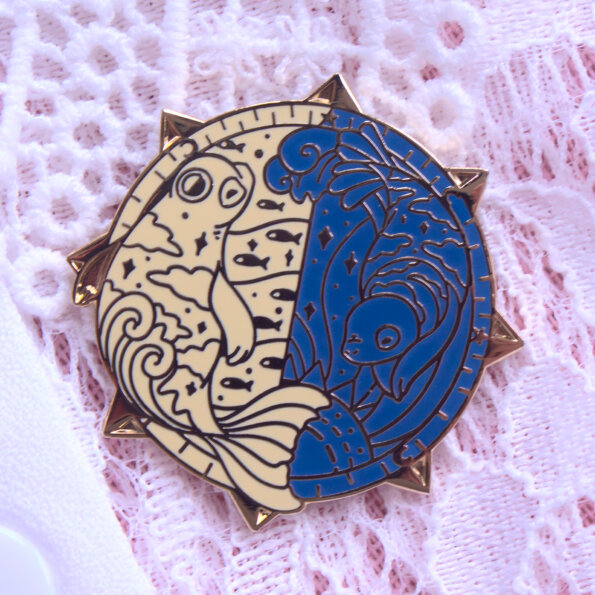 Our last pit stop is in the Epipelagic Zone: back in shallower waters. This is where photosynthesis occurs. And it’s also where we encounter the Māui Dolphin, who’s been paired with the Waning Gibbous Moon. The Māui dolphin is a subspecies of Hector’s dolphin, and are one of the earth’s rarest species of dolphin! It frequently hangs out in the Epipelagic Zone, so it’s a real treat to have encountered it. 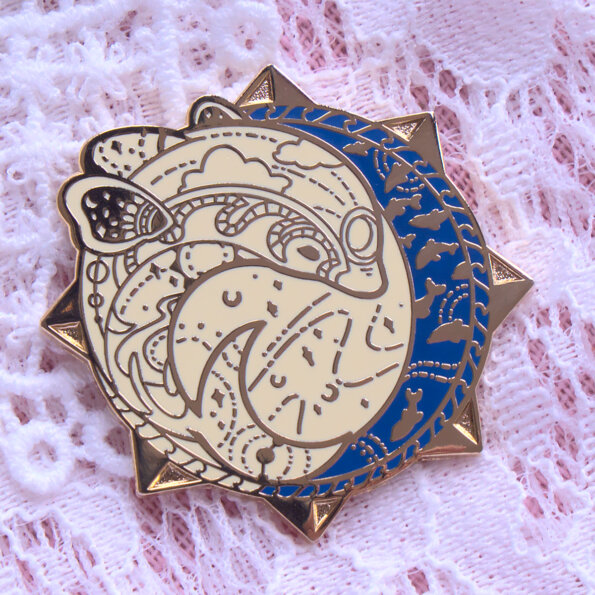 Ready to complete our dive? Let’s head back to the surface.

There are no reviews yet. 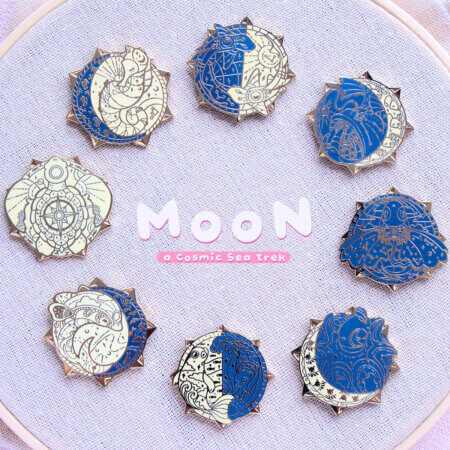 This website uses cookies to improve your experience while you navigate through the website. Out of these cookies, the cookies that are categorized as necessary are stored on your browser as they are essential for the working of basic functionalities of the website. We also use third-party cookies that help us analyze and understand how you use this website. These cookies will be stored in your browser only with your consent. You also have the option to opt-out of these cookies. But opting out of some of these cookies may have an effect on your browsing experience.
Necessary Always Enabled
Necessary cookies are absolutely essential for the website to function properly. This category only includes cookies that ensures basic functionalities and security features of the website. These cookies do not store any personal information.
Non-necessary
Any cookies that may not be particularly necessary for the website to function and is used specifically to collect user personal data via analytics, ads, other embedded contents are termed as non-necessary cookies. It is mandatory to procure user consent prior to running these cookies on your website.
SAVE & ACCEPT
Shopping cart close